What a wonderful afternoon it was! The sun was shining inside and out. 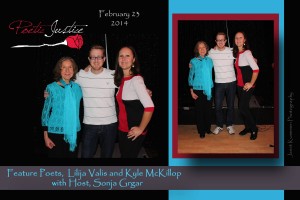 SYLVIA TAYLOR began with reading a few of her various works. I especially enjoyed Winter Harvest, which was written for her father. Beautiful write, Sylvia. She took some time to update everyone on the wonderful, and positive outcome of the Han Shan Project. Indeed, as she stated, “The pen is mightier than the developer.” She ended her recital with the Prologue and Epilogue of her popular book, The Fisher Queen: A Deckhand’s Tales of the BC Coast. Thank you, Sylvia.

KATHLEEN KATON TONNESEN shared her writing based on her experiences working with FAS children. Flies in a Jar is a work which speaks of the effects that alcohol and drug abuse have on pregnancy. She continued with her work, Wordless, regarding the communication difficulties that FAS children face. She also recited Homeless, a view of life on the street and the hardship of those who live there. Kathleen finished her recital with one of her works included in the recently released, Royal City Anthology. Thank you so much, Kathleen.

LILIJA VALIS with the musical accompaniment of Enrico Renz and Lawren Nemeth, was absolutely stunning. It was such a pleasure, for those of us who “thrive” on music, to listen to it blending with the Word. Lilija did a number of her works, Welcome to Las Vegas, Scuttle, and Trust, to name a few. Thank you so very much for such a wonderful performance – excellent and relaxing.

To all who attended, our most sincere thanks – we could not have done it without you!! 🙂